Bryan Patrick Stoyle is a professional actor and a voice actor in the Star Wars fan audio community. He is known for portraying Zallaron Kell in Always in Motion: Ambush on An'Kerra as well as playing multiple characters in Conquest of the Empire. Bryan also served as a co-host to Robbie Chastain on his internet radio show Star Wars and Beyond in 2006.

Stoyle was introduced to Star Wars by his younger brother and cousin, at the age of 12 during the summer of 1996. With the release of Shadows of the Empire, Hasbro's new toy line and the anticipation for the Special Editions and Prequel Trilogy, Stoyle entered Star Wars fandom right as Star Wars was returning to mainstream popular culture.

Stoyle quickly became an avid reader of many of the novels and comics in the Expanded Universe, as well as collecting and customizing action figures. His fandom remained strong throughout his early teenage years, though slowly waning in his final years of high school.

Upon entering college in 2002, Stoyle took up a renewed interest in science fiction and comic books, and through some of his film classes started looking into fan films of various genres. Upon perusing the Fan Films section on TheForce.net, Stoyle came across episodes of Digital Llama Radio. From there, Stoyle was introduced to the slowly growing world of fan internet radio shows, listening to early episodes of ChronoRadio, Requiem of the Outcast and Star Wars and Beyond. Stoyle also watched as audio dramas slowly developed, primarily from Rayzur's Edge Audio in the genre's formative years, such as Second Strike.

After spending over a year and a half being a fan audio listener, Stoyle started to record auditions for several projects in 2004. He would eventually be cast in small roles in some projects, however many of them never saw completion, including the Star Wars/Star Trek crossover audio drama, Crossed Galaxies: And Yet There Was Light.

After hearing some voice auditions of Stoyle's, and after correspondence on the Galactic Senate message boards, Rayzur's Edge Audio founder Nathan P. Butler contacted him in late 2004 to lend his voice talents to a new project he was developing. The project was Always in Motion: Ambush on An'Kerra, a fan audio take on the "Choose Your Own Adventure" storytelling format, in which the listener would decide the direction of the protagonist, a young Jedi padawan named Zallaron Kell.

Butler approached Stoyle to portray Zallaron, the drama's lead, stating he would need someone both young and with acting chops to perform the difficult task of recording lines for scenes that link up in different ways, as well as lines for scenes that would cause completely different storylines while still remaining true to the character. Stoyle recorded his lines in January 2005, and the audio drama was released online on March 1, after a special preview on Star Wars en Direct on February 27.

When Butler was creating Other Voices, a new "news magazine" format radio show in 2005, Stoyle volunteered to contribute a segment to the show's premiere episode. His segment "Defending the Menace" was a look at the positive aspects of Star Wars: Episode I: The Phantom Menace. The segment explored new perspectives in the hype of Star Wars in the 1990s, from storytelling in the Expanded Universe to the state of fandom over the years leading into the premiere of the film, giving possible reasons as to why the film was not as well received as expected. Other Voices marked Stoyle's first contribution to a radio show rather than an audio drama.

Butler again asked Stoyle to lend his talents, however this time it was to create a series of tutorial segments for his developing series, Fan Audio Made Easy. Stoyle contributed three episodes (12, 13 and 14) of the series' 36-episode run, giving basic instruction to the art of acting and voice acting.

Conquest of the Empire[edit | edit source]

Stoyle has also portrayed a large number of characters in Joe Harrison's audio drama Conquest of the Empire, including established characters from the Star Wars films, such as Crix Madine, Commander Veers and Captain Antillies. Stoyle's work on this five-part series earned him his first Fan Audio Award, for Best Supporting Actor in an Audio Drama, in 2007. Stoyle tied for the award with Nathan P. Butler, also from his work on Conquest of the Empire.

In 2005, shortly after seeing the premiere of Revenge of the Sith, Stoyle answered the call for guest contributions by Robbie Chastain, host of Star Wars and Beyond. Stoyle's comments on the film were released in the radio show's sixth episode.

As summer 2006 was ending and Stoyle entered his fifth and final year of college, his workload became too heavy to continue to commit to a regular role on the show. Chastain recorded Episode XVIII on his own, stating Stoyle's busy schedule as a reason for his absence. Stoyle officially stepped down on September 11, 2006, with a statement on the Galactic Senate message boards:

"[College & acting] commitments, among many others have been eating up my time, and I have often had to hold back on recording sessions with Robbie. Other times we've had a date set and then I've had to cancel or postpone. I will admit Robbie has been a great sport about the entire ordeal, but I feel that is unfair to him as a co-host to not be able to record, especially considering the show does not have a rigid release schedule."

Stoyle amicably parted ways with Star Wars and Beyond without recording an official send-off. He made one last appearance on the show, returning for Episode XXIV, the 2007 Fan Audio Awards presentation, released on January 28, 2007.

During the summer of 2006, Stoyle realized a small dream of his by appearing as a guest on ChronoRadio. By this point, host Nathan P. Butler and Stoyle had collaborated numerous times with Always in Motion, Other Voices and Fan Audio Made Easy, as well as Butler's fan audio trailer for Kevin J. Anderson's "Saga of Seven Suns" series of novels. Butler finally brought Stoyle onto his premiere radio show for Episode XXVIII: "Words, Words, Words." During the episode, Butler and Stoyle discussed pronunciations in the Star Wars universe.

Stoyle went on an unofficial hiatus in 2006 after stepping down as co-host of Star Wars and Beyond, returning only once to help present the 2007 Fan Audio Awards. Now a college graduate, Stoyle is currently pursuing a professional acting career, having performed in many theatrical productions and low-budget films in the Western New York area.

Stoyle returned to the fan audio community in early 2008, and quickly voiced the role of Kal Karna in Eric Olp's audio drama Stand. He has also been voicing the character of Azar in Jeff Roney's original audio drama series New World Army.

While Stoyle has returned to voice acting for audio dramas, he has expressed no interest in hosting or co-hosting radio shows, limiting his commitments to manageable bits while keeping his main focus on pursuing professional acting work. Stoyle was asked by Robbie Chastain if he would have any interest in returning as co-host for the relaunch of Star Wars and Beyond, to which Stoyle politely declined. The door has been left open for Stoyle to be a guest contributor on a part-time basis.

Other Forms of Fandom[edit | edit source]

In addition to fan audio, Stoyle currently shows his fandom for Star Wars in many other ways.

Stoyle's interest in fan films manifested shortly before his interest in fan audio, and he has been a long-time fan of the genre. In 2004 and 2005, Stoyle participated in three different fan film projects: Lost Soul by Justin Monk, End of the Order by Andrew Hookway, and Tortured Soul, a prequel to Lost Soul, written by Stoyle himself. None of the three films were ever completed, however they did lead to the formation of the Key Pixel Gathering of Filmmakers, a group of producers in Upstate New York and Southern Ontario, which have gone on to create a number of short original film pieces.

Footage from Lost Soul, Tortured Soul and End of the Order was combined and edited together by Key Pixel producer Laszlo Kovacs into a "super trailer," trying to use the footage to create a singular storyline. The project was given the title Star Wars: Broken Worlds, which was released onto YouTube in April 2008.

Stoyle also served as a script doctor and an extra for the upcoming Boba Fett fan film Uprising, shot in Southern Ontario in 2008.

In 2007, Stoyle won a contest held by author Clive Young of Fan Cinema Today, to provide a subtitle for his book on fan films, "Homemade Hollywood." Stoyle's winning suggestion of "Fans Behind the Camera" was selected, and became the subtitle of the book when it was published in 2008.

In addition to Star Wars projects, Stoyle has also served as a producer and actor in the fan film Stargate: Hades and has acted in an episode of the web series Star Trek: Phase II. 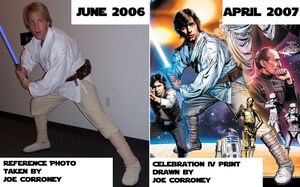 In addition to fan films, Stoyle has taken an interest in costuming for Star Wars and for other franchises. Stoyle "troops" in two costumes from Star Wars: Luke Skywalker from A New Hope and an X-Wing Pilot. He plans to continue with costuming for the Star Wars, Stargate, and Doctor Who franchises. Stoyle is an active member of the Rebel Legion and SciFi Hero costuming groups, and occasionally appears at charity events in costume.

Stoyle's Luke Skywalker costume was the model for comic book artist Joe Corroney while creating his "30 Years of Star Wars" print, sold at Celebration IV in May 2007. Stoyle also appeared in costume in Issue #101 of the Star Wars Insider.

Stoyle is also a member of the Western New York chapter of Fan Force - The North Ridge. The North Ridge is one of the most active Fan Force chapters in the United States and is often doing events to promote the love of Star Wars and raise money for local charities.

Always in Motion: Ambush on An'Kerra at Star Wars Fanworks

Star Wars and Beyond at Star Wars Fanworks

Conquest of the Empire at Star Wars Fanworks

Other Voices at Star Wars Fanworks

The Key Pixel Gathering of Filmmakers

Retrieved from "https://starwarsfanworks.fandom.com/wiki/Bryan_Patrick_Stoyle?oldid=4545"
Community content is available under CC-BY-SA unless otherwise noted.